A quick note: I’ve just upgraded to the latest version of WordPress (2.6) mainly because I keep getting this little note in the admin area telling me I need to upgrade… it’s niggling. And I don’t like to be niggled all the time.

On the other hand, if you find anything broken or troublesome, please drop me a line and… how shall I put it? Niggle me, please. I’ll fix it. Eventually.

According to Collins Essential English Dictionary (via thefreedictionary.com) the verb to niggle means either to worry slightly or to find fault continually. As a noun, it is a small worry or doubt or a trivial objection or complaint.

You may also wish to fuss, nag, carp, criticize, cavil or nitpick but, if I were you, I would stick with niggling… it’s more polite. Although quibbling is also acceptable. You might also consider pettifogging. 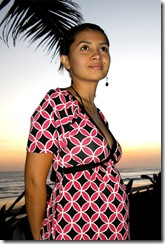 We’ve been married now for 2 Years …and, in that time, youâ€™ve never looked more beautiful and Iâ€™ve never been more in love or more happy…

…you are my Queen and Iâ€™m happy & proud to be your husband.

I have loved every moment of our time together…

A homeless woman in Japan moved into a man’s apartment and lived there for a year without his knowledge… hiding in a closet.

He only became suspicious when food started disappearing.

Story by Mari Yamaguchi on Associated Press (via Yahoo) — click here to read.

Brilliant. A real live Bogeyman… bogeyperson? Bogeywoman. Forget Lost in Translation or The Terminal — this story has it all.

Best quote of the piece:

She had moved a mattress into the small closet space and even took showers, Itakura said, calling the woman “neat and clean.”

Yes. On one level, the story has me giggling away like a kettle lightly on the boil… on the other hand, there’s an element of sadness (you don’t need to embellish the story with metaphors for big city anonymity, loss and isolation) and then there’s the creep factor: holy shit — she lived there an entire year before she was discovered. Would have made a great Ghosthunters episode… Jason & Grant debunking the myth by finding the woman who would be a mouse.

For your further edification, here’s what Wikipedia has to say on the Bogeyman:

The bogeyman, boogyman, bogyman, boogey monster, or boogeyman, is a folkloric or legendary ghostlike monster often believed in by children. The bogeyman has no specific appearance whatsoever, and can in fact vary drastically from household to household within the same community; in many cases he simply has no set appearance in the mind of a child, but is simply an amorphous embodiment of terror. Bogeyman can be used metaphorically to denote a person or thing of which someone has an irrational fear. Parents often say that if their child is naughty, the bogeyman will get them, in an effort to make them behave. The bogeyman legend may originate from Scotland, where such creatures are sometimes called bogles, boggarts, or bogies.

You can read the entire article on Wikipedia by clicking here.

A lot of the articles I saw (turns out there’s a helluva lot of stuff online related to Bogeymen… can’t quite figure that one), suggest that Bogey may originate from bog… bog man. Silly, as we all know that bogeys are nose jelly.

Athina & I shot this video yesterday (uploaded to GoogleVideo):

If you’re a complete masochist and need more fuel for your self-inflicting pain fantasies, you can download the Windows Media format file here:

Or the MPG here:

Both files are around 4 megs. 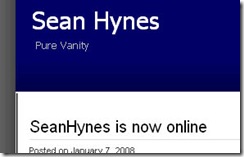 One of the wonderful (truly wonderful) features of the new WordPress is that you can export / import the whole blog so, rather than spend a day or two copying articles back and forth between here and Bali Belly, I’ve been able to get Sean Hynes up to speed in 5 minutes flat.

If anyone’s following this stuff (and judging from the barrage of junk and spam, I’m only being seen by robots), SeanHynes.com is my own little vanity site — a place for me to lay out the daily stuff on a personal level.

There’s not a lot of new info here (as I write); most of the content being a copy of articles originally hosted on Bali Belly. The Bali Belly site will now be used to separate off topics related to normal, daily life here in Indonesia.

If you have any questions, or even just want to say, “Hi”, drop me a line at info@seanhynes.com — I’ll answer when I have a moment. 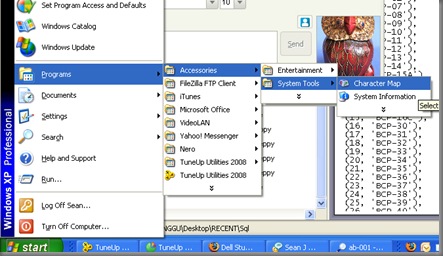