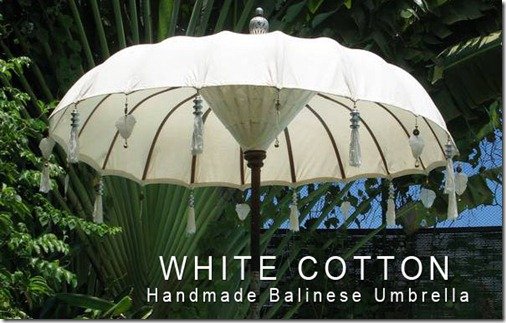 …annoyed with google again… put up a new page at Indonesia Export for Wholesale Balinese Umbrellas.

A few hours later, checked google on the off-chance that it had gone into the index and was delighted to find that it was already there and respectably listed (fourth or fifth)… not the super dooper top listing but more than adequate. Monday morning, it’s gone and I can’t imagine why.

We’re on the page (down in eighth position or so) but not the actual umbrellas page that was there on Friday night – now it’s just our homepage.

Cannot figure it out and not sure I would ever have the energy to bother. Just an odd, annoying result.

In case you missed the announcement, Beads-Bali.com is now live — here’s one of the introductory FAQ articles, let me know what you think.

Who are you really?

The company, at this time, is made up of myself (Sean), my wife Athina and a group of local silver smiths and bead makers. There is also my wifeâ€™s puppy, Jolie, and my black lab, Mojo.

We live here in Bali, fairly close to the beach (I can see it from my window as I type this).

Iâ€™m fairly new to the beading business but Iâ€™ve been working professionally in Bali for the last ten years (or more) exporting handicrafts and furniture around the world with Indonesia Export.

My background is London-Irish (ethnic, not the rugby team although I did manage a short stint there while I was a kid).

Athina is originally from Solo on the island of Java â€“ thatâ€™s very close to the recent earthquake and volcano if you caught any of that on the news.

The idea for making a specialist department to handle bead supplies and exports out of Bali was Athinaâ€™s â€“ she believes that although the market is very competitive, there are actually only a few decent, ethical suppliers out there doing business and even less of those are based here on Bali with the resources that we have.

Athina is the one to talk to about new designs, sourcing beads and all of the creative, hard work. She is also the only member on the team with any concept of taste or fashion. Really.

I deal mostly with communication, logistics and being mean to people when they show up at our warehouse with lousy products. I do this very well.

You could say that Athina walks softly while I carry the big stick.

If you want to know any personal information about us, you can check out are blogs:

Or, you could email us at info@beads-bali.com

Up until about five minutes ago, I thought I understood the meaning of “Bali Bead”…

I had thought, silly me… SOOOO naive… that a Bali bead was a bead made in Bali. Apparently not.

According to one article:

â€œBali beads originated in India. The Indians taught the Balinese how to make the beads. The majority of Bali beads today are still made in India. Some people differentiate between Bali and Bali Style beads. Bali style beads are made the same way as Bali beads, but do not come from Bali – instead they come from India.â€

Itâ€™s the overall tone of the article that bugs me â€“ The Indians taught the Balinese how to make the beadsâ€¦ youâ€™d figure â€œthe Indiansâ€ might have called them Indian beads, wouldnâ€™t ya?

More importantly, for me (and I admit, Iâ€™m a little funny about stuff like this) the article seems to miss the point somewhat:

Itâ€™s true, of course, that Indian culture and religion has played a very large role in the development of this little island culture.

The Hindu religion and culture arrived in Indonesia about 2,000 years ago â€“ probably by Indian traders from Gujerati who were attracted to the islands by their riches in gold, spices, and sandalwood. And why not? Thatâ€™s exactly the way Islam & Christianity also arrived hereâ€¦ trade.

Indian script has been found in Indonesia dating back to the 5th Century and shows that there were several Indian-style Kingdoms in West Java and Borneo.

Today, you can still see the remains of ancient monasteries and temples in Bali. In these places, the Balinese prices were consecrated into the Indic family tree as god-kings. Balinese script, which many Balinese kids still have to learn, is derived from the Palava script of South India.

Now, Iâ€™m no expert on Bali or Balinese history â€“ Iâ€™m just reading from other (hopefully more learned sources) but it seems to me that a person saying, â€œthe Indiansâ€ taught the Balinese to make beads is kind of like saying the Romans taught Americans how to make bridges and buildings. So, really, the Golden Gate Bridge and the Empire State are Italian but we call it Americanâ€¦ maybe theyâ€™re Greek.

Let me put it this way: the Balinese have been working stone, wood and metal since the Early Metal and Bronze erasâ€¦ BC, in other words. Between then and now, theyâ€™ve had just about every foreign influence you can point to or shake a stick at: Indian, Arabic, Chinese, Dutch, English, Japanese, Malay. In other words, just like America, England or Ireland, many foreign feet have left impressions in the sand.

In no way at all does that mean that a Bali bead is really an Indian bead (or vice versa).

For our Bali beads, which are all made in Bali (natch), wood, glass and .925 sterling silver are the most common materials.

Like any handicraft in Bali, the beads are really made by handâ€¦ really. Thereâ€™s no industrial process, no huge factory spitting out beads by the million.

The handicraft industry as I know it has always been a cottage industry.

On one level, that means the beads differ very slightly â€“ it could be a bad thing but I find the concept of a unique article to be charming.

We buy our beads at prices that are a combination of silver weight in grams (material) and workmanship â€“ that means certain items are more expensive just because more work goes into themâ€¦ Iâ€™ve been purchasing in Bali on that system with beads, statues and furnishings for such a long time that it makes total sense to me.

Monday morning at Indonesia Export and we’re still working on getting one of the offices painted right… still looks less than perfect to me.

The weekend was a breeze — hot and sunny. Didn’t do much except to sit around and wait for Mount Merapi to blow its top.

Got a call on Sunday evening — a friend of Athina‘s heard a large bang and thought maybe there’d been another terrorist attack so we spent a few hours checking online and watching the news but as far as we can tell, nothing much happened. Most likely a neighbor overdosing on Spermamax.

33 days to go and I’ll be married… so excited about it.

I’ve been reading a lot of stuff about the proposed new pornography laws in Indonesia and, yes, I find a great deal of it disquieting.

At the office, this topic has featured in five or six different lunchtime conversations and everyone does have an opinion.

Last week, we went as far as to get ourselves a copy of the bill and I had it translated. Interesting reading to say the least.

But why the broohaha? It’s a law. Indonesia doesn’t enforce them anyway. Pornography’s against the law (meaning the hardcore stuff) but you can get it pretty much anywhere. END_OF_DOCUMENT_TOKEN_TO_BE_REPLACED

Ok, you can pretty much ignore the title but an interesting thing…
Yesterday, over lunch with the chaps of Indonesia Export, going over the weekend activities, it turned out that Antonia went to mass at Kerobokan jail (most recently featured worldwide with stories on the Bali Nine, Schappelle Corby and all the other distinguished Australian ambassadors of goodwill currently serving time or getting shot on Bali). END_OF_DOCUMENT_TOKEN_TO_BE_REPLACED