Doh, it’s may 14th and we still don’t know whether the prawn will be a boy or a girl…

…for what it’s worth, we’re hoping for a little girly sprog and, according to the doctor this morning, that may be what we’re going to get… because there are 4 lines between the legs that usually indicate the vagina (labia minor & labia major) at the developmental stage.

Update: You can now see the video on Google Video by clicking here.

Truthfully, I don’t know a lot about that… he could have said what he liked and I would have nodded along like the amiable dolt I am. So, there you go: it’s probably a girl but could still be a boy.

We did try a whole bunch of different angles and so on to get a clearer picture of ‘The Package’ but, as usual, our baby twisted, somersaulted and, memorably, knelt down twice as if in prayer to avoid showing her (or less probably ‘his’) parts and keep us in suspense as long as possible.

Today’s scan was 3D (sometimes called 4D in Bali… I’m not really sure why) Ultrasound — here’s a quote from Wikipedia:

There are several different scanning modes in medical and obstetric ultrasound. The standard common obstetric diagnostic mode is 2D scanning.[1] In 3D fetal scanning, however, instead of the sound waves being sent straight down and reflected back, they are sent at different angles. The returning echoes are processed by a sophisticated computer program resulting in a reconstructed three dimensional volume image of fetus’s surface or internal organs; allowing one to see width, height and depth of images in much the same way as 3D movies but no movement is shown. 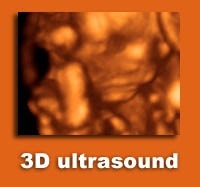 Ahem. We just wanted a bit more detail than our usual scan (which, in terms of picture quality, comes down to the same process as discerning shapes in cloud formations).

Most exciting for me was the appearance of a face and a fully formed hand (not just flipping about but waving before the thumb was sucked in and swallowed for some good old fashioned stress relief).

And though we’re still not absolutely sure and there’s always room for a surprise and the doctor was appropriately tentative, I’m officially upgrading ‘The Prawn’ to Human Being (Half-Baked Bean in Tomato Sauce) by the name of Sophie Helen Hynes… and I now know Sophie’s nose is completely unlike mine.

Unless of course that wasn’t your nose but just a slightly squidged up cheek. Oh well.

You can download the MPEG here… it’s 18 MB and should play on most computers without too much trouble.

And you can now view on Google Video by clicking here.

Thought for the day: You know how every proud parent says their…

The big news today, I’m ashamed to admit has nothing to do…